I generally don’t have a problem sharing a room with a stranger, but I do believe there are certain unwritten rules to follow

1 – keep idle chit chat to a minimum. A hello will suffice upon entry.

2 – keep your stuff over the other side of the room

My evening in Clun YHA comprised none of the above. Through my own making I had a rather awkward conversation as I had apparently left some loose change on this chaps bed. “Are you the mountain biker with the fat wheels?” (As an opening gambit hello is better). “Yes”. “Did you leave money on my bed?” “Errm, possibly”. “Why?” “Because I am forgetful”. As it turns out it was about 2.81, not enough to tempt even the most desperate traveler into some sort of paid sex encounter I’m sure.

As I free wheeled down the rather steep road into Clun the night before, I decided to forgo my breakfast until I had done the climb out. This was a good choice. It’s a warm up for sure. When I eventually arrived in Knighton sweating profusely and decidedly hungry some 45minutes later,  I thought what better way to start the ride than with a cafe stop.  JD’s Cafe gets a good write up and is well worth a visit.  Dean is an extremely jovial and chatty Black Country bloke who does a splendid Bacon and Egg sandwich. He also asks a lot of questions about fat bikes. However it was now 9.30 and I hadn’t started. Tick Tock Tick Tock…..

I retraced slightly to start at the official point, Knighton Railway station. After a short trip back through the town, the route starts with a gentle road climb out of Knighton along the Teme Valley.  The sun was shining and the birds were tweeting. Actually the birds weren’t tweeting as much as I thought. I had an annoying noise coming from my drivetrain that sounded remarkably like a bird song.  And a sort of creaking noise coming from my luggage that I fiddled with making no difference whatsoever.

As you arrive into Knucklas you pass under the Knucklas Viaduct. I am a big fan of viaducts and I don’t utter that phrase lightly, so I stopped for a photo and a read over its history. Completed in 1864, it is a Gothic Style 13 span monster. At 23 m high and 174m long, it is described as one of “the most picturesque Viaducts in the UK” Some post ride research also tells me that it’s was constructed out of rough stone, thus giving the impression it had been there for centuries. A truly fantastic structure to behold.

Now at this point my Garmin seemed confused and I set off only to turn around and then head down a private drive to a dead end with a somewhat grumpy homeowner who stated  “a load of you lot always come down here”  Very apologetic, I advised I would notify the “GPS people” whoever they may be, (but I thought it sounded remarkably official) and then added “what a beautiful view you have of the viaduct from your house”. A facial expression can often communicate far better than the spoken word. This message was clear. Fuck off.

I continued along a typical British hedgerow enclosed road becoming increasingly more agitated at the fact I couldn’t get back onto the route. I had missed the remains of Knucklas Castle, but I am less of a castle fan than viaduct fan so not a major issue . I was running parallel to the route displayed by the Garmin in the correct direction so I clearly needed a left to get onto the route.  I found a left, rode across a field full of sheep shit depositing plenty of it all over me and by bags, found a dead end and rode back across it, again, showering myself in sheep shit. Eventually finding a better looking left turn, I attempted to ride up a grassy 1 in 3 (failed), found another field, hiked across that as the grass was too long to ride through, climbed over a barbed wire fence, hiked across another field and eventually  heard the delightfully little ping of the Garmin saying “course found”. Learning point. If you are shit at map reading, when the Garmin says off course, retrace and find the route. Or better still learn to map read.

I was now atop Beacon Hil. The route now follows Thye old ridge road to Newton. Thousands of years old, it was preferred to the valleys as you were safer from ambush until we had decent roads.  Thye views from the ridge are spectacular.  It was a little bit “draggy” but as I crested the first summit and looked down to the descent ahead it was worth it. That was until I crashed. Quite a good one too. As I away on the floor I remembered I had 30psi in a Maxxis Mammouth tire, something that is ok on the road, but akin to riding on sheet ice off road. I dropped the psi to fat bike territory and recommenced, chuckling at the irony that I had been “ambushed” by my tires on a non ambush route.

The rest of the morning was great, good climbs, good descents and I was heading towards the first proper stop of the day at Lllanbadarn – Fynydd. It’s a funny thing once you get fixated on something,  it has to happen. I planned out my lunch carefully in my head, sandwich, chips, two pints. I arrived at The New Inn more than ready to enjoy a nice pint. Except it was shut. Now at this point you can do one of two things. Get incredibly angry at the injustice of it all, or tentatively walk around the back of the pub and peer through the window with a very forlorn face. I went option B and the rather kind landlady took pity on me and offered me a sandwich and pint of Grolsch or Carling, as turns out they were closed due to the cellar cooler being replaced for the real ales on tap.  I don’t drink lager as a general rule, but the two Grolsch went down a treat. What a wonderfully kind lady. It’s those little things that restore your faith in the kindness of humans. 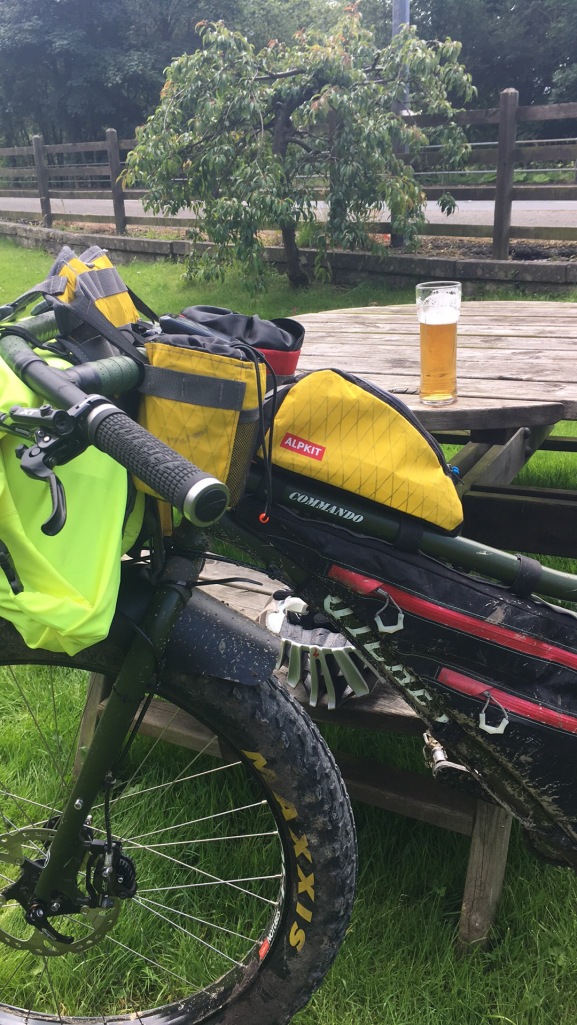 Post Lunch, buoyed by my two pints and the Brie Sandwich , I crossed the ford across the River Ithon and onwards towards David’s Well, an area apparently badly affected by the Poatato Famine. Onwards again through the Brondre – Fawr forest, with a mixture of dingletrack and fire road climbs. The afternoon passed without incident, save for another little mud related tumble. I’m sure the additional weight of the bags on the Jones bars leads to my poor handling….

As I approached Rhyadaer I had a decision to make. The option of a campsite was available, warm shower, easy camping spot and a short walk to a variety of pubs. Or I could press on and get into day two of the ride and make up a bit of time. Breaking that down to a decision – beer and an easy camp or keep riding. Of course I stopped.

Undoubtedly setting up on a camp site is a soft option. “Real” Bikepackers rough it. They find a secluded little spot in the woods or on a mountain hillside with an incredible view. However, on this occasion I fancied a shower, wash through my clothes in a sink and most importantly have a shit on a toilet rather than in a bush. I fully intended to have the “real” experience the next night somewhere near Lllangurig. I use a bike supported tarp and bivvy bag, a good lightweight set up. I also leave a pair of grotty socks in the foreground of my photographs.

The evening was spent with a little wander around Rhyadaer, visiting the Lamb and Flag for a pint, then the Crown for food and another couple of pints. I went to bed looking forward to an early start for a big day of riding tomorrow, with the added bedtime treat of an abundance of midges really pissing me off.