A rather tardy display of blogging at such an early stage, predominantly due to work commitments. I’ve yet to catch up with the highlights on ITV, but its a sign of the success of cycling that in any daily paper you can get good coverage of the race. Probably less than 5 years ago you would struggle to get more than a few column inches.

I can’t actually decide if I like my beloved sport becoming the new golf in the corporate world. That may be another blog another time……

Back to the race. A stage win then for the big man himself Griepal. Personally I don’t like the look of him. He has a passing resemblance to a science experiment that didn’t go quite to plan (harsh but look at the pictures below)

One is Greipal posing, the other is sloth from the Goonies winning a tour stage. 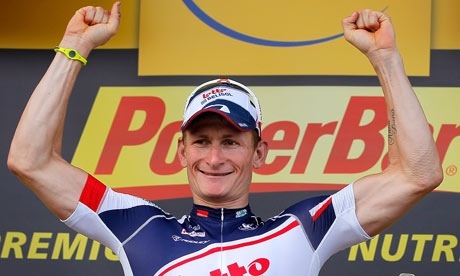 A bit of an unlucky day for Cav and apparently a tantrum at the end for good measure concerning his rather fancy specialized bike. Any self respecting cyclist knows if you fall off its due to the bike….. I have also never won any race of merit because of my gears.

Missing out on the points when it’s a flat stage is a bit of a blow to the overall green jersey comp, and this was compounded a day later when the self proclaimed “hulk”popped up and got himself his first stage win. You have to hand it to him, his all round ability seems to point to the green jersey being a bit of a one horse race.

This raises an interesting point. Traditionally it was the sprinters jersey, but I can’t really see how it can continue in that vein. It’s now the most consistent finishers jersey. A sprinter shouldn’t be able to climb – he should be off the back at the earliest point of a mildly hilly day. To me, it needs a refresh with the sprinters jersey being that – winning a sprint stage gets you some serious points, with those designated a non sprint stage (it’s pretty easy to determine) carrying less points or even none at all. It then gives rise to the concept of a most consistent jersey, which the all rounders can have a proper crack at. Lets keep the sprinters jersey for the fastest people in the race. A true head to head between Griepal , Cav and Kittel would be something worth watching. Barring a disaster, Sagan is the green jersey again and that leaves the odd stage win for the sprinters.

I’m looking forward to the first day in the mountains. Great that the your hits us with a summit finish top on the first day of the real test. My guess is Froome will seek to take an early advantage.
And show his strength.